E L E V E N M O N T H S 💫 Well 2 days ago, but better late than never! It feels like I blinked and here we are 😭 This last month brought a lot of babbling, cruising, climbing the stairs, and plain wanting to be big! You laugh like crazy for your brothers. You caught on to some sign language, love to dance and always want to be included with the big guys. You need mommy 98% of the time and still don’t sleep through the night 🙃 BUT you light up our life with your sweet smiles and silly noises! 🥰 We love you baby dubs! ❤️❤️
I might be 5 days late, but it’s never too late to wish you a Happy New Year from the Irr family! May your 2022 be filled with a lot of love, laughter and new memories made! Looking forward to our year ahead and seeing our littlest guy turn one in just one month 🤯🤯🤯
This is T H R E E 😅 Brady bug you flourished this year! 2021 was a weird one, but for you, it was magical. You started school and THRIVED! You grew into your own personality and made your presence known. You made real friends with your peers. You learned to walk (and still working) and made big gains in your communication skills. Most of all, you LIVED this year to the fullest and laughed a lot of the way through it. My little love bug, keep on being you because this world is better with you in it ❤️ Next year, we’ll work on you keeping your feet off the counter 😘 #nyebaby #threeyearsold #youngwildandthree #nothingdownaboutit #downsyndrome #downsyndromelove #downsyndromeawareness #downsyndromerocks #homiewithanextrachromie #theluckyfew #mymiddlelittle #alwaysmybaby #middlebrother #middlesibling #happybirthday #mysonshine #littleworldchanger #morealikethandifferent #specialneedsmom #differentabilities #inchstone
Instagram vs Reality 👉🏼 there’s always one that ruins the fun 😘 Also, swipe for the cutest picture of Brady ever and my other two handsome dudes 🥰 The tradition continues, 4 years and counting! 🎄
T E N M O N T H S have gone by in the blink of an eye! 💫 It feels like just yesterday we were bringing Wesley home from hospital 😭 This last month has brought on more teeth, more sickness (thanks big brothers), more sleepless nights 🙄, but a whole lot of more love 🥰 Wesley is pulling to stand, crawling after his brothers, laughing constantly and already getting into EVERYTHING 🤦🏻‍♀️ We love you to the moon 🌙 littlest dude. Now please please please sleep all night for momma 🙏🏼🙏🏼 #mylittlestlove #littlebrother #10monthsold #tenmonthsold #babyboy #thebabyofthefamily #littlestbrother #youngestbrother #youngestof3 #mylastbaby #babiesdontkeep #timeslowdown #myhandsomelittleman #littleman #almostone #momof3 #boymom #momofboys #momof3boys
Brady’s first ever school picture - NAILED IT! He looks so handsome 🥰 The fact they got him to sit still and smile on a day that he started feeling ill while at school is amazing! They are angels 😇 AND they snapped the sweetest sibling picture too 🥰🥰🥰 👉🏼 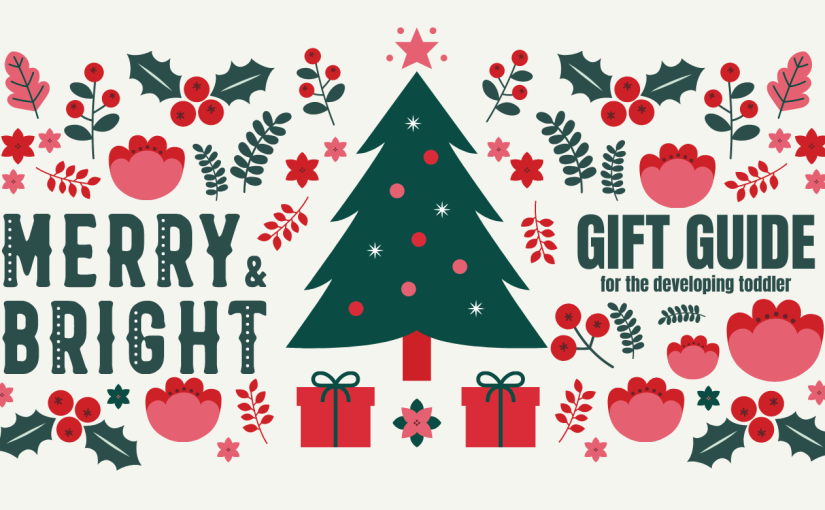 gift guide number 2: the developing toddler. I put brady in this category at 23 months, however, most of these gifts are great starting at just 6 months of age. they can easily grow with your child well into years 3 and 4. believe me, landon plays with more of “brady’s toys” than his own…

that’s it for toy recommendations this year! I shared a few bonus toys in my instagram stories, so make sure you are following me there too. next up, grandparent and co-worker gifts. 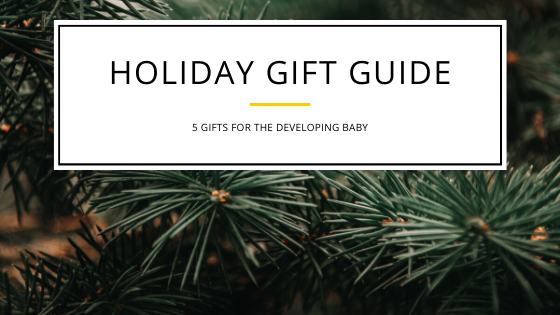 i’m back with another gift guide, this time with ideas of what to buy for the young babies and toddlers that are both fun, but also strategic. i say strategic because they are fun enough that they won’t know they are actually working on their fine motor or gross motor development. most of these are based off of recommendations from our PT and OT… 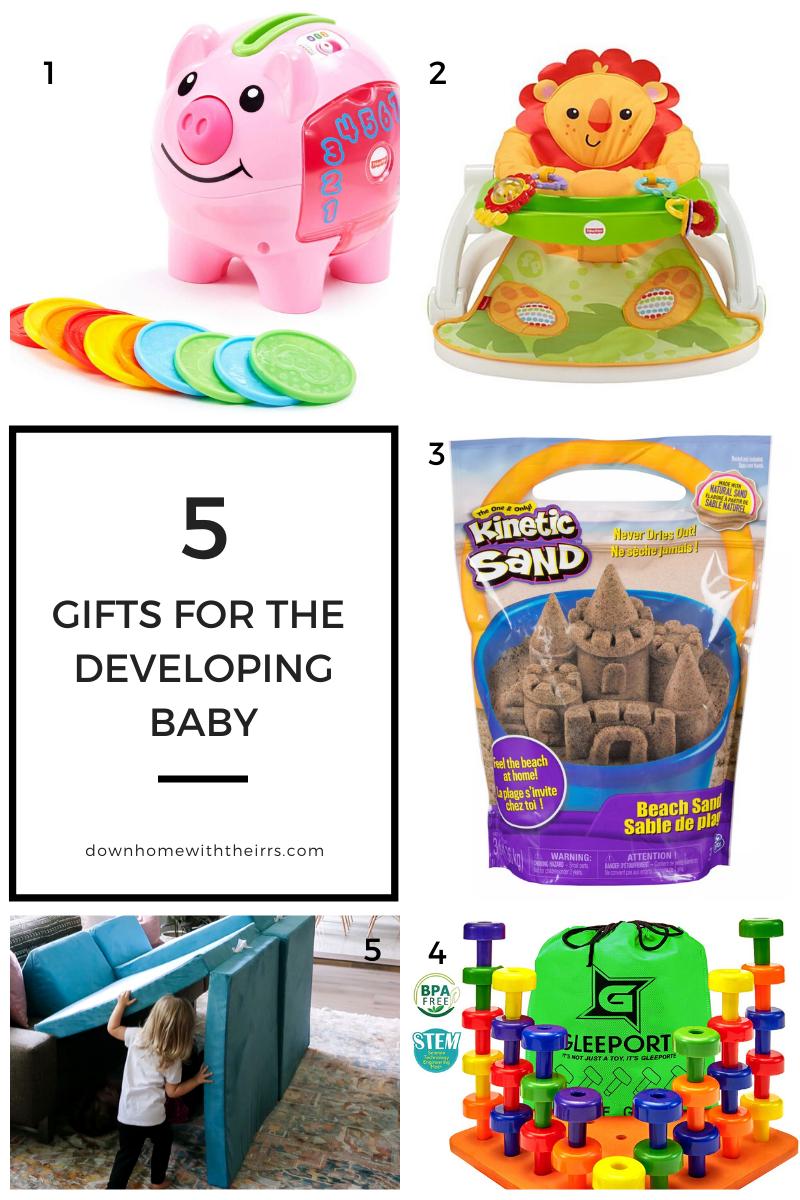 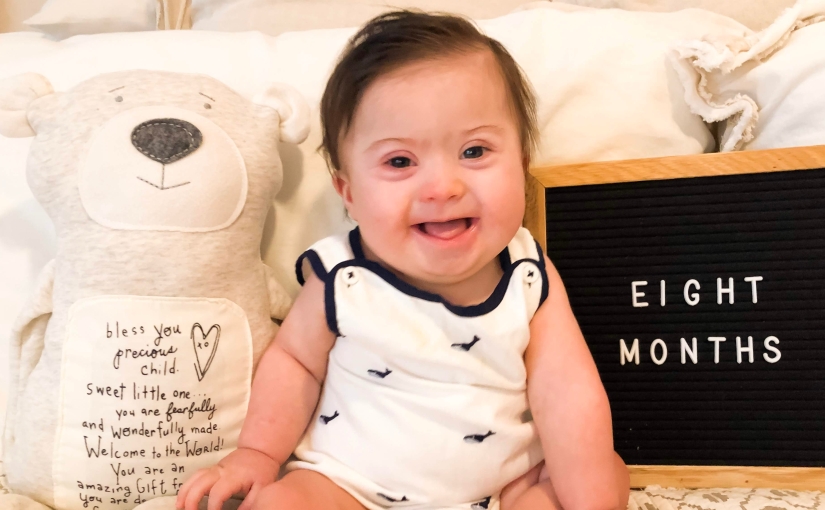 brady is officially eight months old (plus eleven days, because life) and i am starting to freak out. we are closer to him turning one than him being born and it’s really starting to hit me. this month was a big one in some ways (heart surgery), but also a slow one because we were waiting for surgery, had surgery and were recovering from surgery. 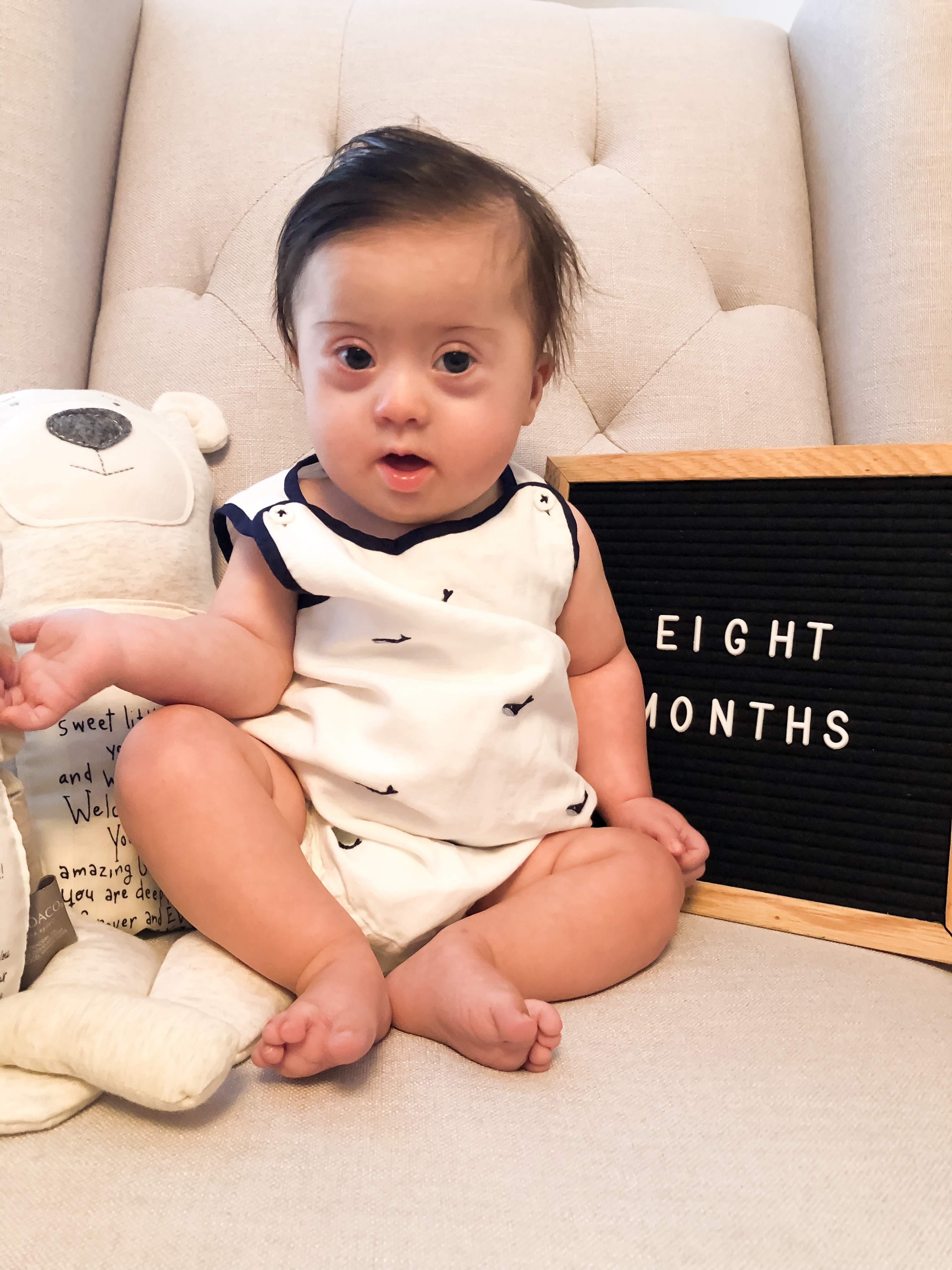 brady started sitting up unsupported (he still splats occasionally) and more importantly, he had his heart repaired!!!! he has a WHOLE heart and my heart couldn’t be happier for him.

heart surgery was a big hurdle and one we are happy to have behind us. i can’t wait to share that story with you soon. brady rocked it and rebounded even stronger than he was before.

during this month, brady found his feet and cannot stop playing with them all the time. it might be the cutest thing ever. he also expanded his solids palate and likes mostly everything. we should have feeding therapy set up within the next month and see how he continues to progress in the solids world. 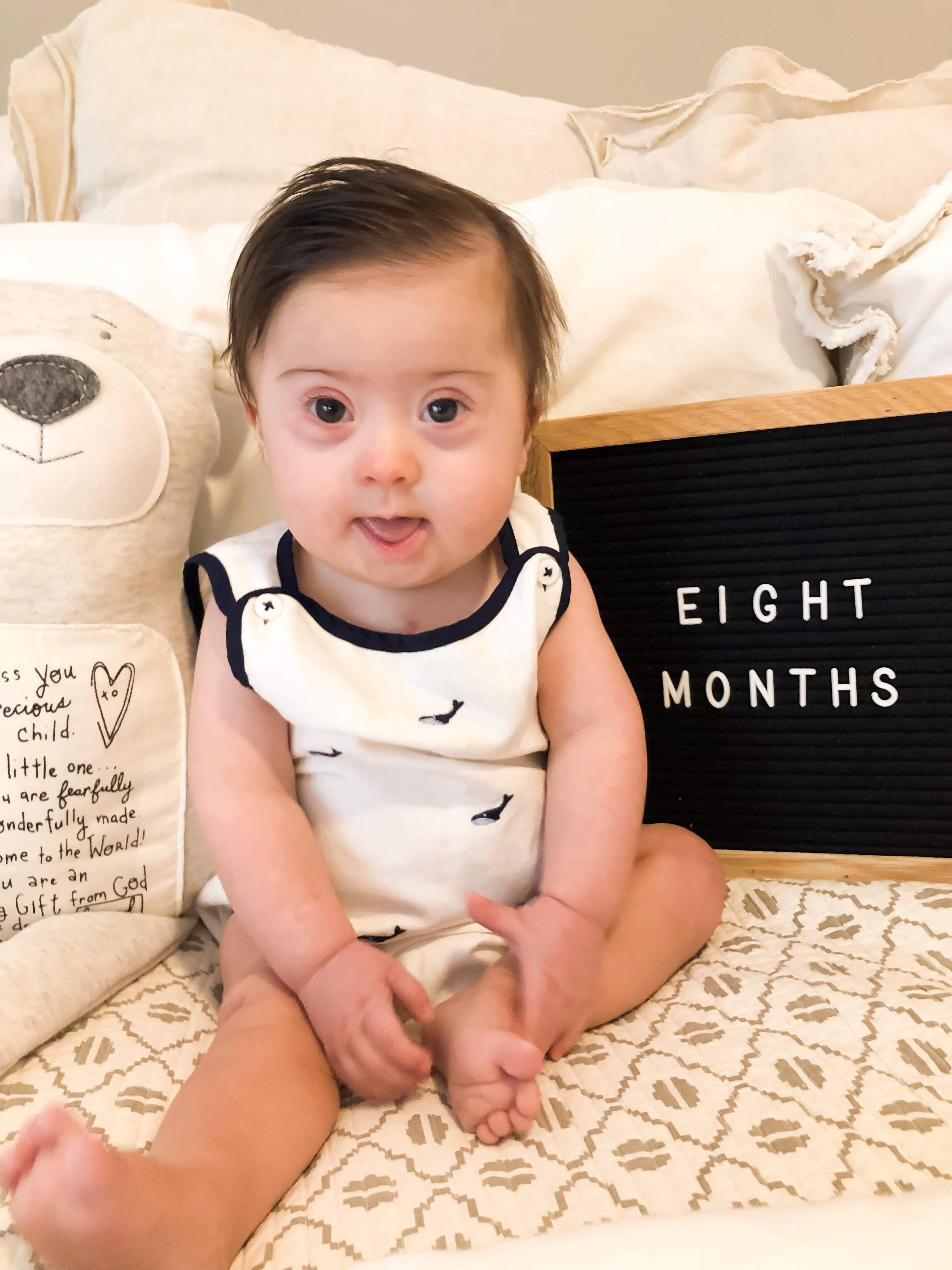 landon and brady continue to be best buds. seeing landon love on brady and miss him when he’s napping is the sweetest. to think i was so worried about their bond before brady was born…. silly me. 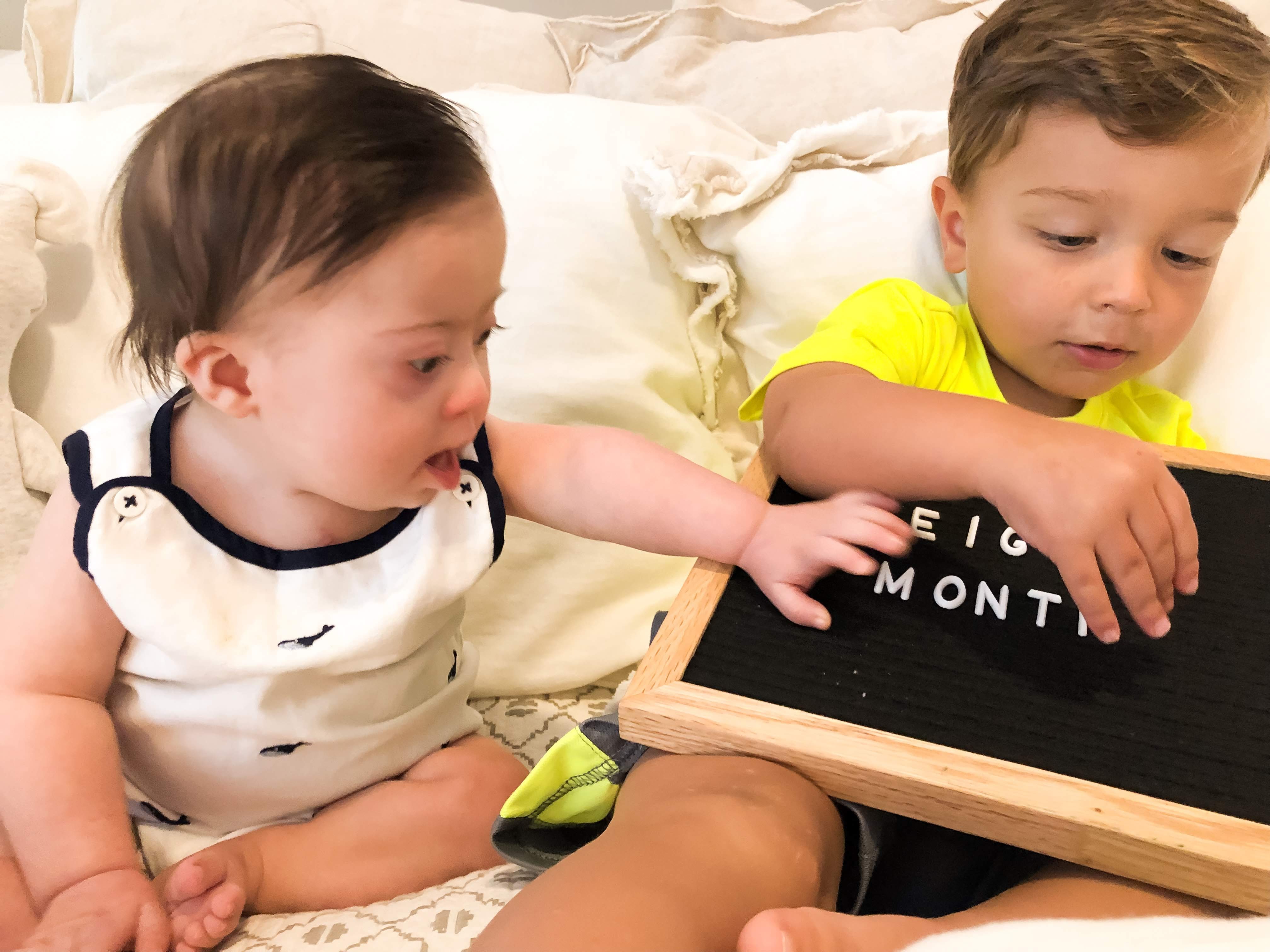 the biggest milestone for me during brady’s eighth month…i stopped pumping so much. heck yes!! stay tuned for more of this in his nine month update. 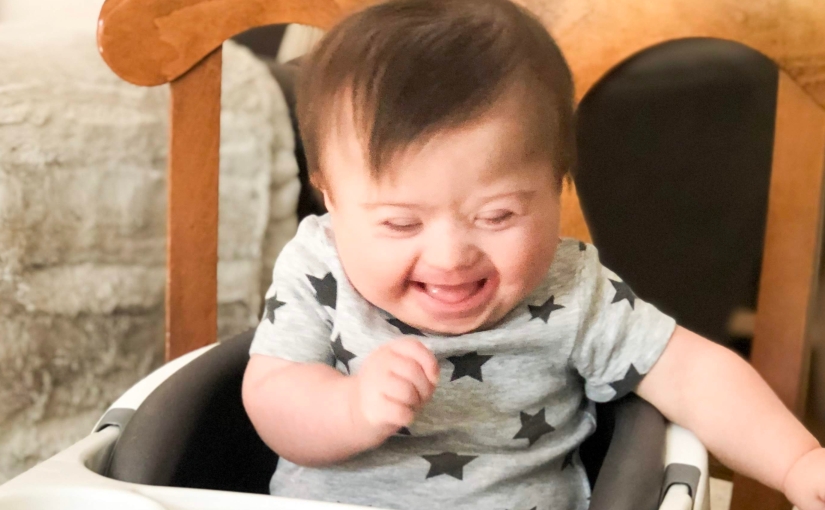 hey y’all. i’m back. after a 2ish month hiatus from the blog (aka summer break), i thought it was time to give it some love. this post is all about months 5, 6 and 7 – the months i am calling the waiting months. the months we spent waiting for brady’s heart surgery to come, attempting to keep him healthy, failing at that, getting surgery postponed 9 more weeks, struggling with bottles, feeding and weight gain, and finally ending with surgery (and summer). 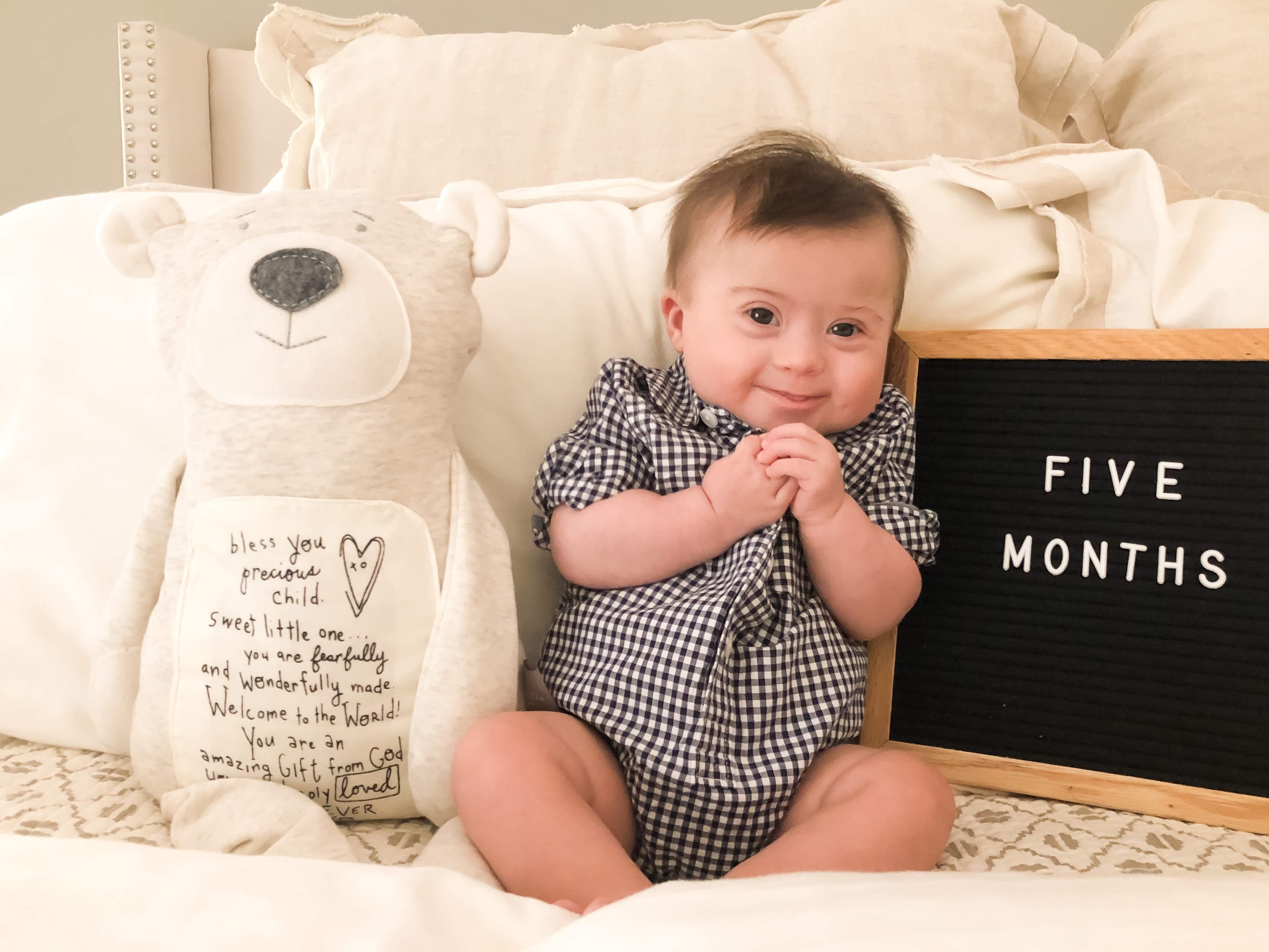 month 5: brady celebrated landon’s second birthday and my first mother’s day with my two nuggets. he started giggling more, smiling with his entire body and getting stronger and stronger in PT. we took his first trip to the beach (and really first trip anywhere). we attempted to keep him healthy and ready for surgery that lingered just on the horizon. month 5 was a big one, but we knew (or thought) month 6 would be even bigger. 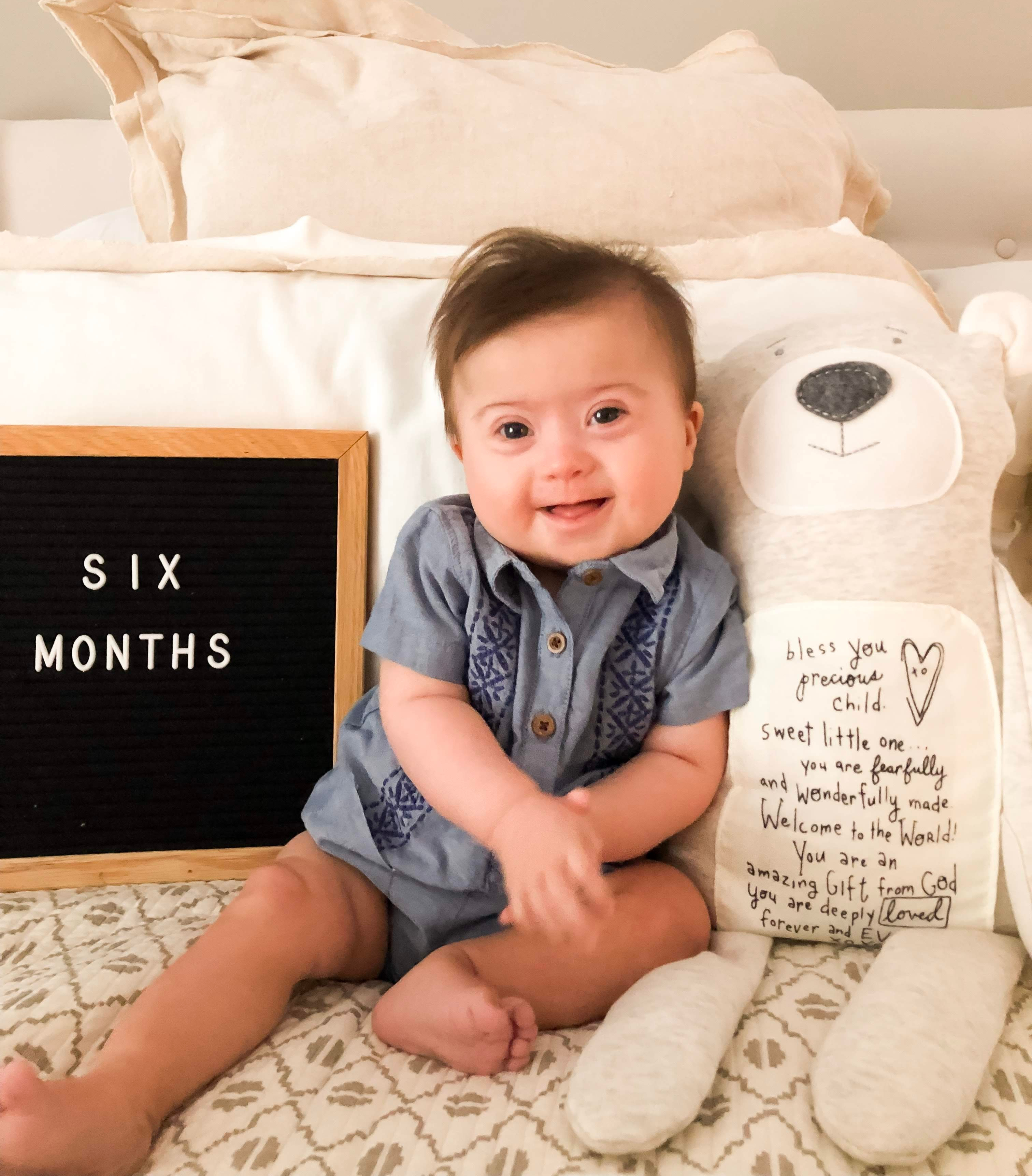 month 6: heart surgery month. not exactly. i know i mentioned it on instagram, but we were prepped and ready for brady’s surgery. we planned a last minute baptism, attempting to fit it into the schedule with most of our family. we had family lined up to come in town and help with landon while we would be in the hopsital with brady. then boom, no surgery. i knew brady had caught a cold the week before. i was emailing with his cardiologist wondering if i needed to speak up to the surgical team or not. we decided to wait it out and see if his body could clear it before surgery. no dice. one nose swab test later and positive for rhino/entrovirus. no surgery. what we thought would be a 6 week bump, turned into 9 weeks thanks to school aged kids planning elective surgeries during the summer months. after this, we decided we wanted to live a little bit. we continued to struggle with bottles, so one day we tried to nurse and he took to it! we went from exclusively bottle-feeding/pumping to nursing after a 5.5 month struggle. things were looking up a bit, until we learned he was not gaining weight. between brady’s heart condition and the calories he burned nursing, he just couldn’t keep the weight on. back to bottles…. 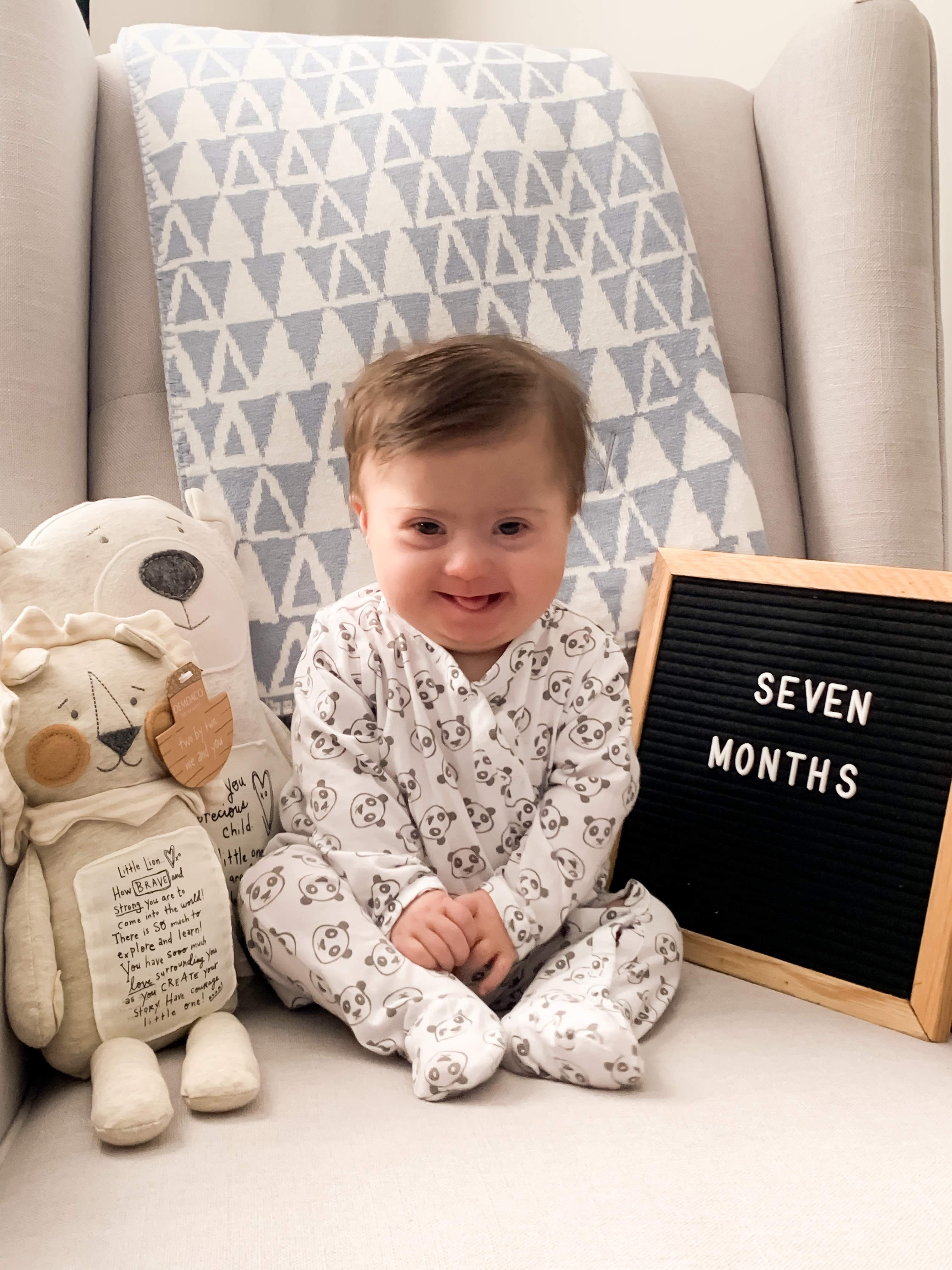 month 7: living a little bit meant we were finally going to take the trip this summer that we missed out on before surgery. so we went to connecticut to visit mike’s family, have brady meet one of his great-grandmas and his great-aunts. he took his first plunge in the pool and officially became a rolypoly. he would literally roll straight across a room if you put him down! we also started brady on solids! month 7 was a big month for him. solids started off okay, he pushed out more than he was taking in, but he didn’t hate it which was huge! brady also finally got fitted for his helmet to correct his plagiocephaly (this will be a separate post) and took to it just fine. it’s a little hot and sweaty in the georgia heat, but like everything else he encounters, just smiled his whole way through it. he looks cute as ever in his helmet too. as we continued to live life and move through more weeks of waiting, brady continued to get stronger. he started to prop sit and impressed his pediatrician with where he was at developmentally.

month 8 update is just around the corner! this little bug of ours is truly amazing and continues to surprise us with his strength, love and smiles everyday! 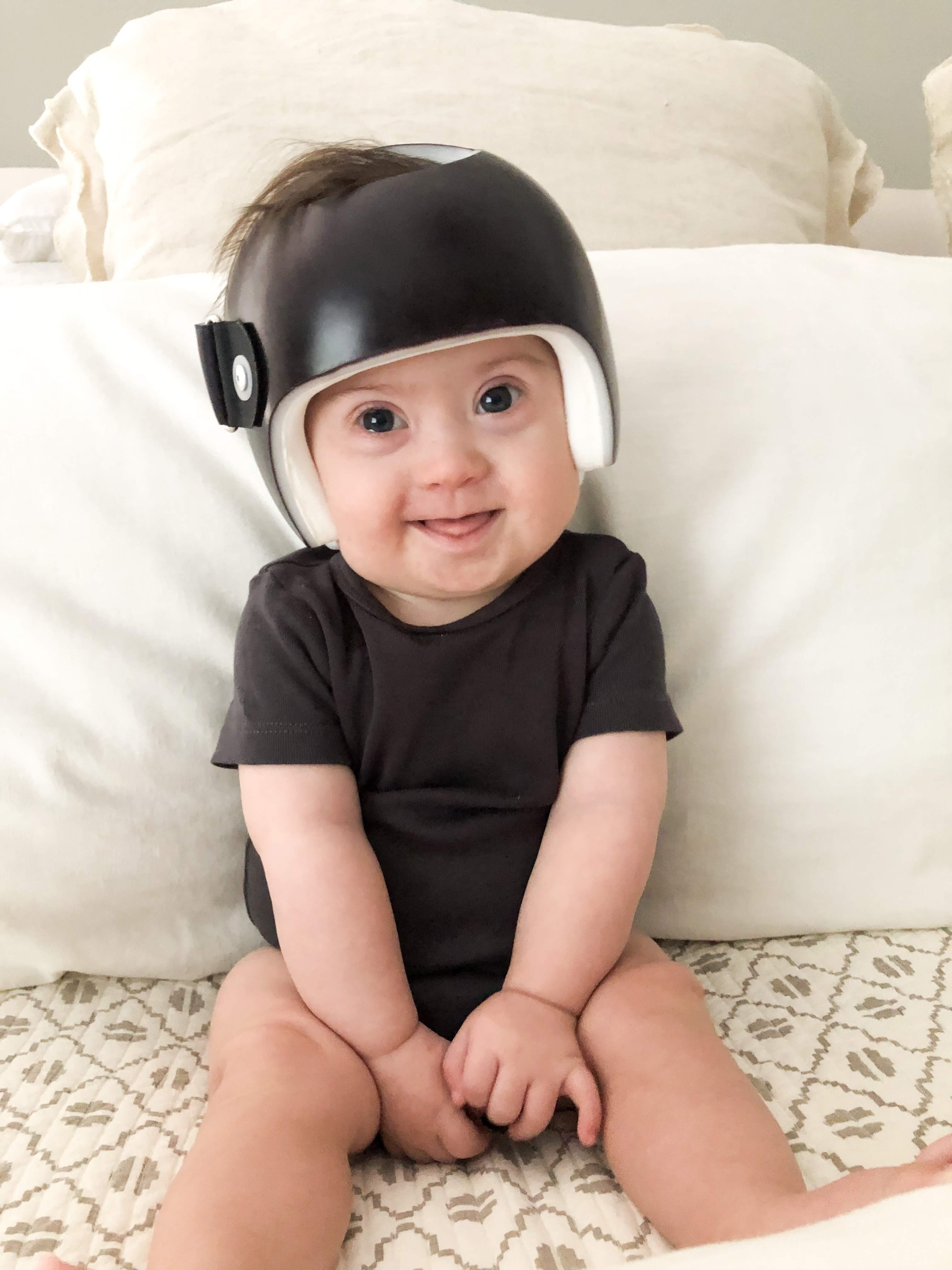